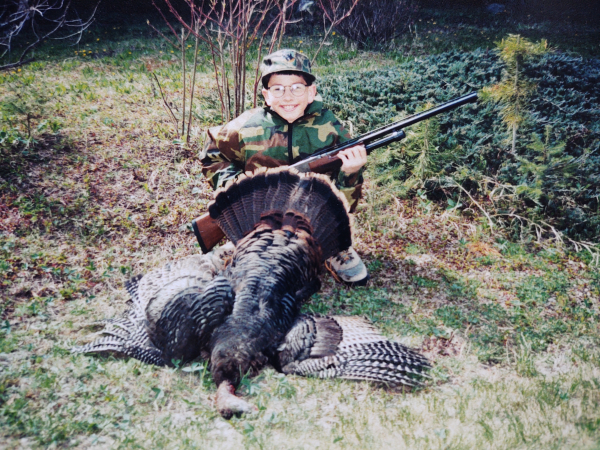 When I turned 12 and could begin to hunt big game, I drew one of the lottery-draw turkey tags.  Turkeys in western Montana were starting to have a huntable population, and you had to put in for the license.  As a 1st time hunter, I could hardly wait for the month between my birthday and the season.  Dad called in a bearded hen, and I remember watching him sprint from where he was calling when the bird went down.  He has seen them jump back up and wanted to secure it just in case.  I was shocked and slightly, okay, very amused at the time.  It was a great day and a great beginning!  I still laugh at how small I was in that 1st picture of me with my first big game.

Hunting in Eastern Montana, Dad split and went around to hunt the other side of the hill.  There had been a flock of turkeys around this ranch, and dad was packing his Marlin 25-20 Winchester.  I heard the report of his gun and found his turkey in hand.  Since then, the 25-20 lever action has always held a particular fascination in my life.  My father has always loved lever guns and now makes peep sights for all sorts of lever and other firearms.  I now get to test Skinner Sights every year!  Don't knock the perks! 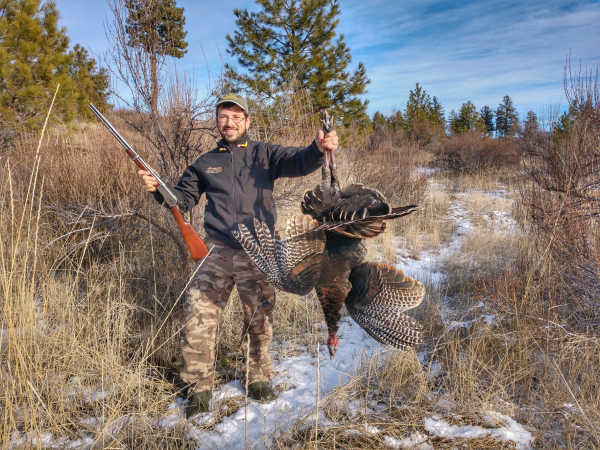 A couple of years ago, on the last day of the year, and correspondingly the turkey season, I borrowed a 25-20 Winchester from dad, and we went hunting.  Turkeys don't respond to a call much this time of the year, but we found a flock working its way through some small trees and sagebrush.  A hen came into view between some brush and hesitated.  The hundred-plus-year-old Winchester took care of her without ruining much meat.  Dad followed the flock, and I heard his Ruger International in 22 Magnum fire.  We both had hen turkeys in an area where Fish Wildlife and Parks was trying to reduce the turkey numbers.  Good deal! 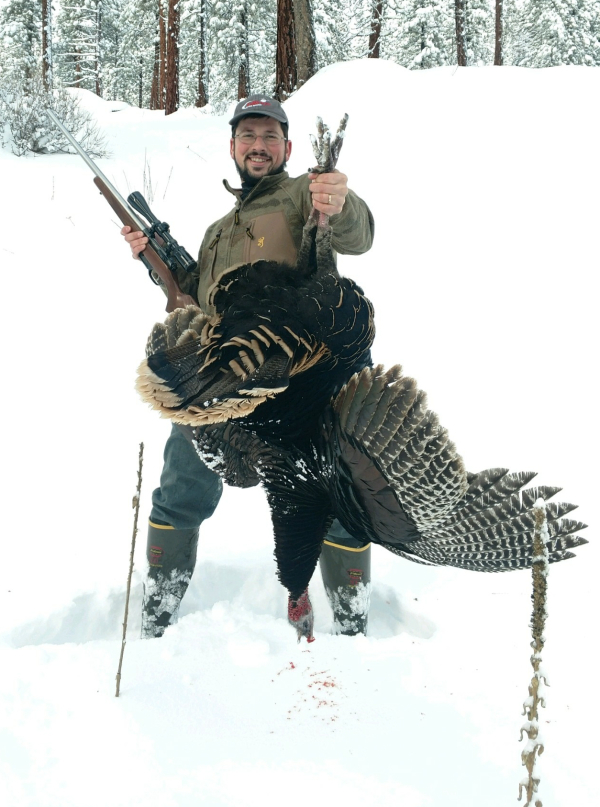 The author with a wild turkey he shot with a 17 Hornet in the snow in Montana.

Hunting deer one day, and I chose to pack my CZ 17 Hornet rifle in case we bumped into any turkeys.  About 10 Merriam toms started to run across a bog from us.  I lined up on the back of one and tripped the trigger.  He fell where he was, and I had to wade across the slightly frozen marsh to get him.  He probably made my best turkey hunting pic!  Montana has both Eastern and Merriam turkeys.  I still need to find a Rio somewhere down south to complete the Slam!

On another post-Christmas hunt, dad and I were hunting turkeys in the snow.  We came around a corner and found three toms.  He shot him with a Savage 17 Hornet, and I used my CZ.  Two turkeys down!  What great memories!

Of bows, shotguns, pistols, and rifles, I enjoy hunting turkeys with rifles the most.  Montana doesn't allow for this method of spring turkey hunting, but it does in the fall.  Some other states allow rifle hunting turkeys in the spring and fall, and some allow air rifles during some of their seasons (CA, GA).  States that allow turkeys for rifle harvest include Colorado, Florida, Maryland, Missouri, Montana, Oklahoma, Utah, Virginia, West Virginia, and Wyoming.  Keep in mind; this list may change with recent legislation changes; always check your regulations before you go!

So, let's discuss the big questions: ethics and reasoning.  Many hold the position that turkeys should only be hunted with a shotgun or a bow.  In many areas, these hunters are right.  Tight population densities and short-range hunting expectations leave rifles out of either need or safe practice.  But yes, there is another option.  I live in Montana, and our state is larger than the country of Germany.  Couple that with just over 1,000,000 people, and you have a lot of space without the population density.  Also, many of our turkeys live in the wide open.  Creek bottoms, big fields or pastures, and mountainsides make up much of where we find turkeys.  In our state, only toms are harvestable in the spring.  When turkeys don't come running to a call in the fall, they open it up to either sex and longer-range guns.  This is ethical and safe in our part of the world.

Montana allows for the harvest of mountain grouse with big game rifle calibers.  Many hunters love to add this table fare to their backpack as they hunt the mighty elk and deer.  Picture this: you've been hunting all day, six miles up the mountain, and are just returning to the truck around noon.  You have a Cup-o-Soup at the vehicle and a jet boil camp stove.  Half a mile before you are going to round the corner and see that beautiful 4-wheel drive; there is a ruffed grouse just above the old logging road you're walking down.  You pull your 300 Winchester Magnum off your shoulder, adjust for close-range trajectory and shoot the ruffed grouse in the neck.  No meat spoiled and the best wild meat (in my opinion) in Montana to add to your lunch.

Turkeys afford the same opportunity.  You don't have to carry two guns just in case you bump into this other species.  A safe hunter always makes sure of their target and beyond and should not fire unless they know where that bullet will wind up.  Not all states allow any caliber for hunting turkeys like Montana for apparent reasons.

When picking a rifle or pistol caliber to hunt turkeys specifically, I don't think it gets any better than the 17 Hornet.  The penetration is perfect, and you can choose the neck, head, or center of the back.  I say this as a spine shot that penetrates the lungs and heart area is a perfect shot for a bullet that isn't going to go all the way through this size of a bird.  The standard 22 Hornet and 223 Remington are also suitable calibers, but you will need to pay more attention to where you hit as more meat will be ruined.  The time-honored 25-20 WCF is comparable in these considerations.  A 22 Long Rifle and 22 Magnum are good turkey calibers in the right hands under the right circumstances (distance, moving or still target, the accuracy of shooter and firearm). 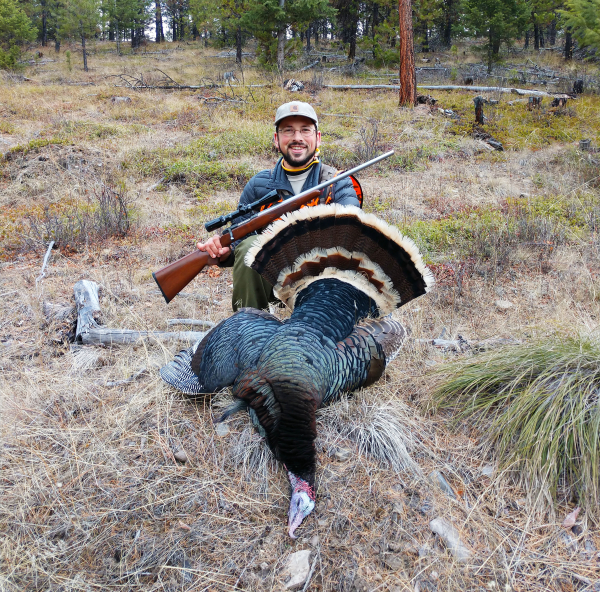 The author with another turkey he took with his 17 Hornet rifle.

One of the things that make our country great is the right of choice and the freedoms we have.  Responsible hunting keeps more of these freedoms open to us.  Go have fun hunting turkeys with whatever legal means available to you!  Not everyone will agree or want to participate in the different modes of turkey hunting, but not finger-pointing or condemning helps everyone.  I, for example, have no interest in hunting from a tree stand.  It is just not something we do much where I hunt, but that doesn't make it wrong, worse, or better.

I will always advocate that hunting with someone makes a bond that you can't get almost anywhere else.  My father and I are best friends primarily based on this time and experience together.  I think back to that first time I heard a turkey harvested with that 25-20 and the hope and desire it created within me.  Aspirations and goals spur us on to progress, and living lives focused on what's next!  Don't live in the has-been; go live in the what's ahead!