Air guns have come a long way in the past few years and can now legally and ethically take big game in some places across the United States. 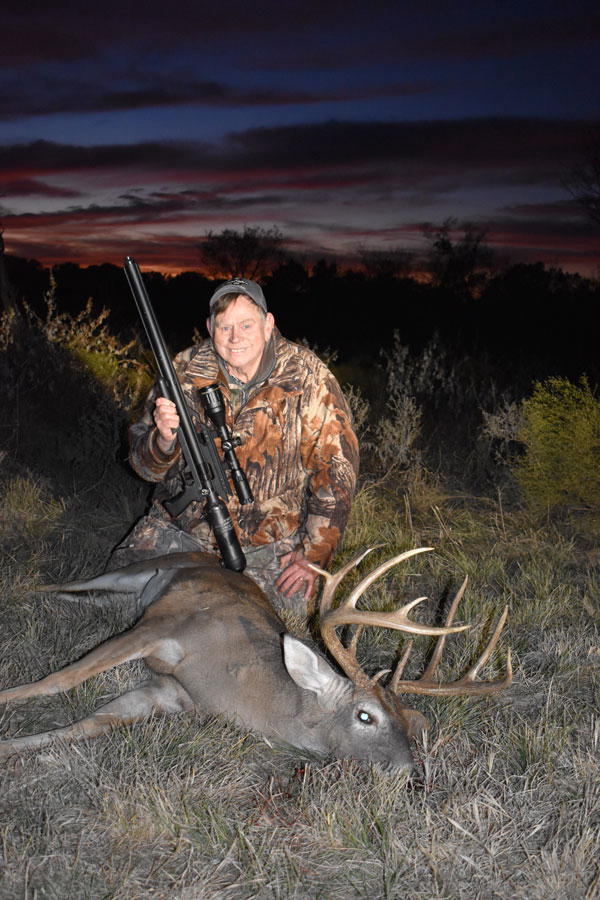 Q: What is the effective range of big-bore air guns in real-life hunting situations?

A: When I first began killing wild hogs and exotics with big bore air guns, I kept my shots very close, inside 50 yards. After a bunch of range time shooting targets, I discovered I could double my shooting range and be effective on game. Because I shoot heavy, 350-grain bullets traveling about 850 fps., bullet trajectory falls quickly after about 75 yards. I have a couple of friends that have been hunting deer and exotics with air guns for years that stretch their shots on out to 150 yards. But doing so requires a very thorough working knowledge of which mil-dot to hold at various yardages and the use of an accurate range finder. In theory, these longer shots with air guns are very doable but only for shooters that know exactly where the bullet will be at the extended yardages. For me, a 100 yard shot at game is the max I will take, that’s the comfort zone for which I have practiced but, I set up for shots half that distance.

Q: How effective are these slowly moving bullets on cleanly harvesting bigger animals?

A: This was the first question I posed when I first began killing hogs and exotics with the power of the air. It’s an old cliché I know but shot placement is of paramount importance. Think of it like this, with a centerfire bullet weighing between 130 and 180 grains, whistling along at 3,000 fps., a great deal of hydrostatic shock occurs upon impact. The bullet can be a bit off and still result in great damage to internal organs.  But a big chunk of lead weighing in the neighborhood of 200-400 grains traveling at about 800 to 850 fps., bullet placement is key. This is one of the reasons I keep my shots inside 100 yards. A big bullet traveling through both lungs or the heart will put any critter down. But, a hit anywhere other than in the vitals or spine will often result in a difficult recovery or lost game.

Q:  Air rifles that shoot arrows (bolts) can now be legally used to hunt big game during the general firearms season in some states. I understand certain big bore air rifles do double duty as arrow guns. Is this correct?

A: Arrow gun - Yes, a device that fires an arrow or bolt solely by the use of un-ignited compressed gas as the propellant is TPWD’s technical description of an ‘arrow gun’. The Dragon Claw by Air Venturi is one such air gun that fires both bullets or air bolts.

Q: What are the power requirements for big bore airguns in most states?

A: Regulations differ a bit from state to state. It Texas, air guns must of at least 30-caliber in diameter and bullets must be 150 grains in weight with a minimum muzzle velocity of 800 feet per second or any combination of bullet weight and muzzle velocity that produces muzzle energy of at least 215 foot-pounds of energy. Air gun hunters should always check the regulations concerning air guns in the state they plan to hunt. Squirrels, pheasant, quail, and chachalaca may be hunted in Texas with air guns that fire a projectile of at least .177 caliber (4.5mm) in diameter producing a muzzle velocity of at least 600 feet per second. Arrows or bolts used with an arrow gun must conform to the same standards for projectiles for archery. Arrow guns may not be used to hunt deer or turkey during archery season in Texas. 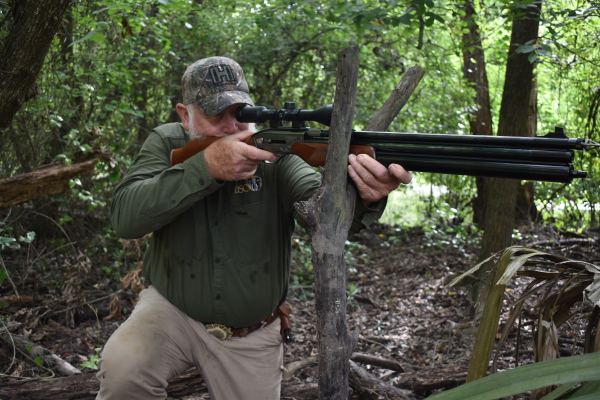 Q: How does hunting with a big bore air gun compare to using a compound bow, crossbow, or muzzleloader?

A: Having hunted with bow and muzzleloader for many years and big bore air guns for the past several years, I’ve found that scoped air guns greatly extend the effective killing distance over bows of all sorts. Shots of 75 to 100 yards are very ‘doable’ with a quality big bore air rifle. But, as when hunting with a bow, it’s often necessary to ‘follow up’ after the shot by trailing the game. Most big game I’ve killed with air guns with properly placed bullets go no farther than 50 to 60 yards. But, because there is no hydrostatic shock with air gun bullets, a bad shot that is not to the animal’s vitals can result in lost game. It’s important to know your shooting limits and keep shots close. An air rifle is not a long-range hunting tool.

Q: What equipment (other than the air rifle) do I need to begin shooting and hunting with a big bore air rifle?

A: PCP air guns operate on compressed air and must be filled via a valve. Filling (charging) an air rifle can be accomplished by using a pre pressured air tank or by connecting the rifle directly to a compressor. Since pressures of 3,000 psi or greater are common, specialized compressors are used. Tanks can be filled at many Airsoft shooting ranges and many local fire departments have compressors on site for filling tanks but at some point, most air gun shooters purchase a portable compressor. 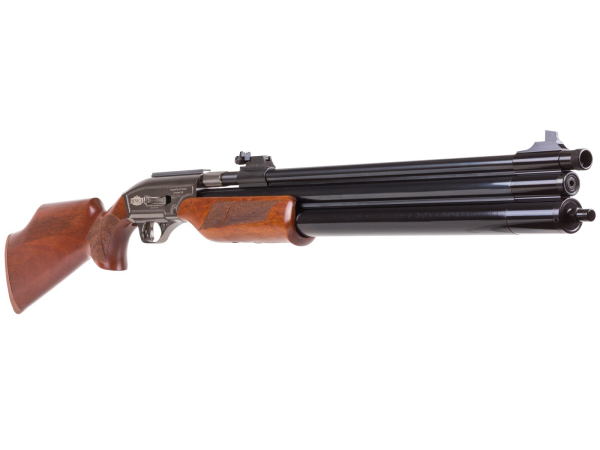 The Seneca Dragon Claw Dual Tank Air Rifle is one example of an air rifle which can be used on big game.

A: This is a challenging question. The answer is dependent upon which big bore air gun one is hunting with and how much velocity and foot-pounds it’s producing.  Some of the less powerful big bores are lethal on even the biggest of big game when shooting air bolts tipped with razor-sharp broadheads. I hunt a great deal with my 45 caliber Texas air rifle by Airforce air guns. With the heavier bullets, I shoot, pushed by the 3,625 psi charge, the rifle easily develops over 500 foot-pounds of energy. On many occasions, I have shot completely through wild hogs, exotics, and whitetails. The Texan is now available in a 50 caliber model that develops up to 800 foot-pounds of energy.

In summary, you might be asking yourself, why would I wish to pay more for a big bore air rifle than I would for a very serviceable centerfire rife? When I first began shooting big bore air rifles, it was all about learning something completely new. Like many hunters, I’ve hunted with just about everything from flintlocks to crossbows and thoroughly enjoyed learning all the nuisances of a different style of shooting.