As the snow blew up my pant leg, I should have been wondering what on earth I was doing laying on the ground in a 30-40 mph snowstorm. Instead, I jumped up and sprinted towards the antelope herd every time the wind would gust, and snow would obscure them from sight. The logic was simple if I can't see them, they can't see me. I'd belly down on the ground when I started to see their outlines again. I had no idea that I would end up 70 yards from the whole unsuspecting herd … 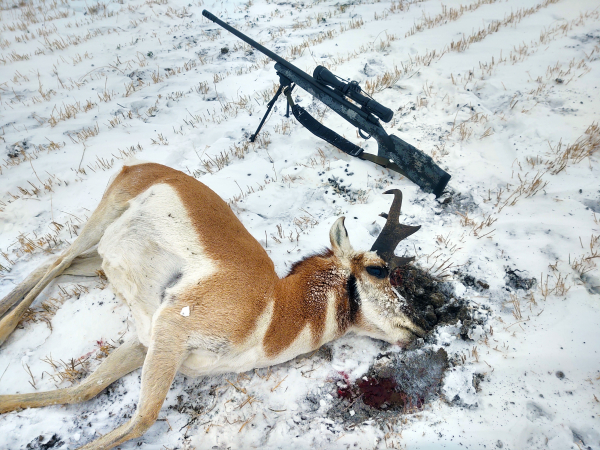 He hit the ground so hard, I had to pull his horn out of the dirt

We started the 3-day hunt looking for muleys. Spotting a nice buck on block management land, we looked through the spotting scope at him. He had a nice 4x4 frame with eye guards. We quickly became excited at seeing such a great buck! About to go over a bluff onto some state land, we decided we'd better put a wiggle in it and head straight for him. We headed across the wheat stubble towards a hill between us and the buck. Staying in a line with each other, we looked more cow-like than three hunters walking side by side, in theory. We lost sight of him about a half-mile out and bellied up on the hill when we came to it. The buck was standing there looking at a herd of does he had been staking out from a distance. Codey made a great shot that dropped him. We were off to a great start! 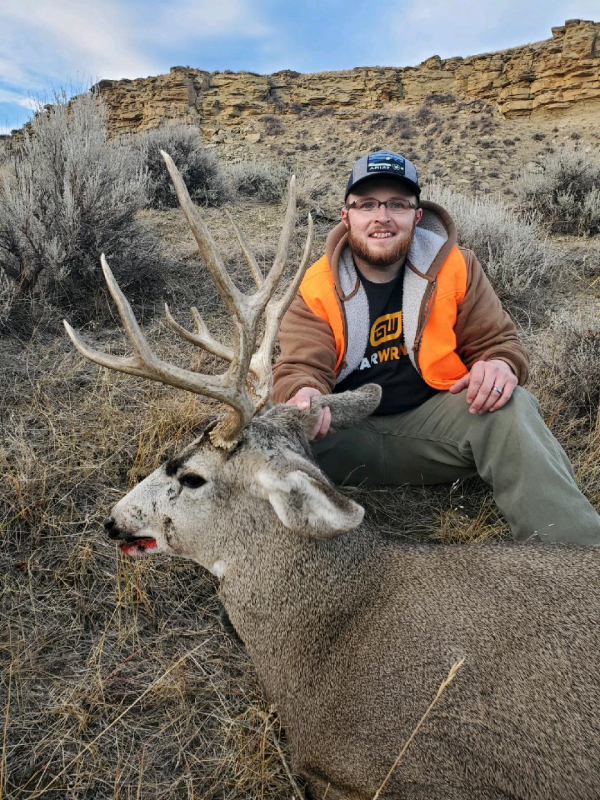 What a great public land buck!

The next day we gained permission to hunt a private farm. My rule, never approach a landowner's house with camo or hunter's orange on. I think all the gear, colors, and gadgets sometimes turn people off to hunters and hunting, but you'd be surprised how often one can get permission to hunt private land. This privilege is dependent on hunters being responsible and leaving the landowner with a good experience every time. We have also met landowners who chewed us out because of irresponsible hunters who came before us. We are our own best friend or worst enemy. Please act accordingly. We ended up spotting some antelope on a piece of state ground across the road and making a stalk. Codey made another excellent shot with his Tikka .270 WSM and put some excellent antelope doe meat on the ground.

Spotting muleys on the rancher's bluff, the only good option was to put a slow open ground stalk on them. Nic and I stood looking anywhere but at the deer that were roughly 450 yards away. They eventually got a little nervous and headed over the bluff. We followed as quickly as possible. Approaching the far edge, Nic spotted some muleys in the flat below. We were crawling low to the ground, and he was leading so he could shoot when in position. As we approached the edge of a finger ravine, I happened to look right. There were 30 muleys below us that we hadn't yet seen and Nic was crawling along with his eyes fixed on the forward group. Seeing the spread of the antlers below us, I knew we had a new and better buck than we watched run over the bluff earlier. I reached out to get Nic's attention and boy did I. I goosed him on the rear. Mind you, it wasn't on purpose and now might be a good time to tell you that he is also my church's minister. Oops. We're still laughing about it. He turned and made a 275-yard shot on a 27-inch-wide muley with heavy antlers. Way to go Nic! 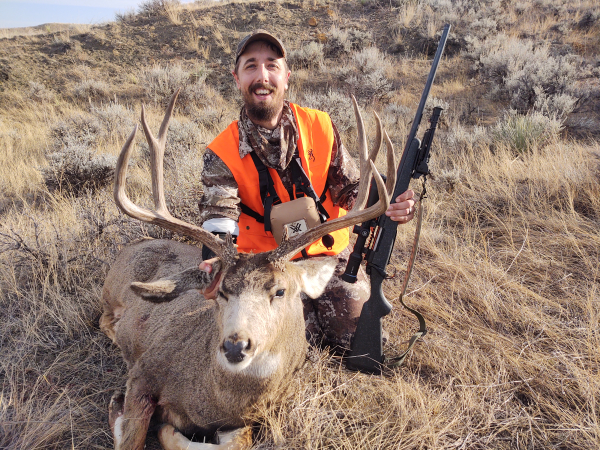 27 inches wide! Nic, the minister, makes the buck and I both look smaller than we are as he is 6 foot 8 inches tall.

Antelope were coming our way, so I left Nic to find his buck in the Eastern Montana coulees and headed off to intercept the herd. They came across a prairie dog town and filtered into the rancher's hay stubble. They settled down and I made a stalk up to a little bump of a hill. I laid there in the grass and waited for a shot. Unfortunately, antelope hunting conditions conspired against me and it took more than one shot to finish off my antelope doe. I would like to say that every kill is a one-shot deal, but nothing is always perfect. I went back and found Nic. His buck had gotten lost in all the little coulee fingers and disappeared. We hiked up onto the hill above and were able to spot it below. What a brute! His brow tine was even cross-shaped due to a kicker in each direction. We boned the buck out and Nic and Codey packed him back to the car. I went back to my doe and hauled her to the truck.

The next day the wind picked up and the snow was shooting across the prairie and breaks like a scalded coyote. It was miserable and visibility was minimal. We drove out to the land we could hunt, and the weather let up some just before noon. I decided I needed to get out of the warm safe truck. So, I hiked back to that field over the hill. The wind was still crazy, but the snow receded to what was blowing along the ground. Hiking over the bluff, I bumped the Muleys off the finger ridges again. No bucks big enough that day. I headed toward the field and the antelope were under the center pivot irrigation system in the same field as yesterday. Then, the wind picked up some more and you find me running and diving to the ground. I may have even skidded a few times. Keep in mind, I don't keep a round in the chamber during potentially dangerous activity. This approach was different from the normal crawling and using every possible hill, ravine, or sagebrush to keep out of sight. Antelope usually see EVERYTHING! Therefore, so many of them are shot at long range. I've rarely ever shot one under 300 yards and at times almost twice as far. Not to puff out my own chest, but I think a good hunter is fluid in their tactics for whatever will work.

With most rifles, I wouldn't have taken on this kind of maneuver. A mark of a good all-weather gun is a good synthetic style stock and a solid scope mounted professionally to the gun. This Nosler Carbon Long-Range rifle is a great all-weather gun. The day before I had a lapse in judgment and dripped antelope doe blood all over it. Blood was in the action, on the scope, and down in around the bolt release. I'm somewhat ashamed to say that a couple of weeks later, I still hadn't cleaned it adequately. The good news is that the Cerakote is amazing, and I'm not worried about anything but the scope rings and the bipod rusting during a hunt. Chambered in the new 27 Nosler, they built it right. The old style of rifling was to shoot lighter bullets and so a slower twist rifling was used. Today, we shoot longer ranges more consistently and you need bigger/longer bullets to shoot more reliably. So, Nosler increased the twist to 1 revolution in every 8.5 inches. Think of it like a football, the longer the bullet the faster it must spin to stabilize so it doesn't tumble end over end. They even designed their own, heavier weight, 165-grain Accubond bullet as the .277 caliber has had almost no cartridge designed around it for such performance. 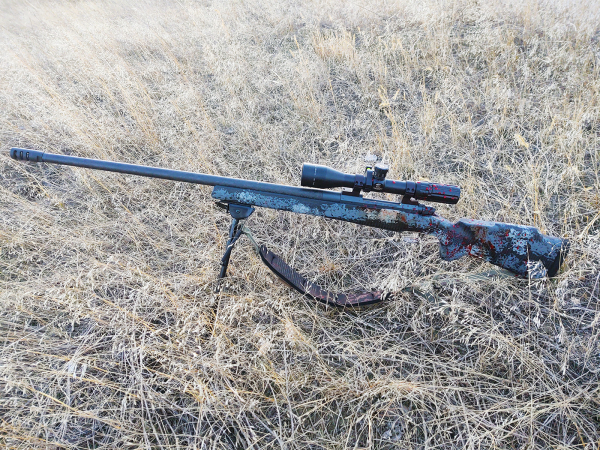 So now I've crawled up to the irrigation pivot and am sitting with my back resting on the steel supports, my bipod is out and I'm watching the two bucks in the herd at much less than 100 yards. The problem was that they were all laying together looking away from the wind and away from me. Antelope are so unbelievably beautiful! I wiped the ice and snow off my eyeglasses every couple of minutes and surprisingly my SWFA 3-9x HD scope stayed super clear. I am a high-impact hunter and I trust these modestly priced scopes above many of the mainstream favorites. Looking through the scope, I could see every hair and was evaluating the two bucks. One was tall but thin horned while the other was short in length but looked like an old bruiser with mass to spare. I was debating on which one I wanted but they chose for me when the moment came.

Occasionally, the antelope does would get up and shake the moisture off. Snow would fly into the wind with a beauty that I can't describe. You'll have to close your eyes and imagine the herd with an inch of snow plastered to them, shaking like a dog after swimming, and laying back down. I was cold. I kept pulling my fingers into my gloves and warming them up. I eventually figured I had better make something happen soon. This may be because my wool pants had frozen to the ground while I sat there. No rear-end jokes here, you can make up your own. I started making antelope noises at them. One doe looked and then went back to napping. So, I yelled at them. Nothing. Let's try howling, coyotes are one of the antelope's worst nemeses. That didn't ruffle them a bit. So, I started barking. Some response, but nothing else. They didn't care about my scent blowing right to them and didn't care so much about noise. I started waving my hands at the antelope does that would glance my way. Eventually, a few of them noticed. They do care about what they see and weren't going to stay around after they saw the movement. I hoped they would jump up and look around. I was wrong.

They jumped up and were headed away at what I would guess was 30 mph (not top speed). I tried a whistle, but it didn't stop them for a look. They ran out to 200 yards, stopping all bunched up. There wasn't a clean shot to be had. I was scrambling, dialing my scope to dead on-hold status, and was trying to swing the scope back and forth on the two larger bucks in case an opening presented itself. Suddenly they started to run. I lost track of one buck and caught a glimpse as he took off over the hill. To quote the duck hunting Robinsons, "he gone." I stayed on the heavier buck and watched for a chance to shoot. The does around him split for a condensed second. As soon as I saw air on both sides of him, I tripped the trigger. What a great trigger at that! You think it and the bullet is gone! The buck hit the ground so hard that his nose and leading horn stuck in the field dirt! The 27 speaks and meat hits the ground... Did I mention that antelope meat is our favorite? It is amazingly good. 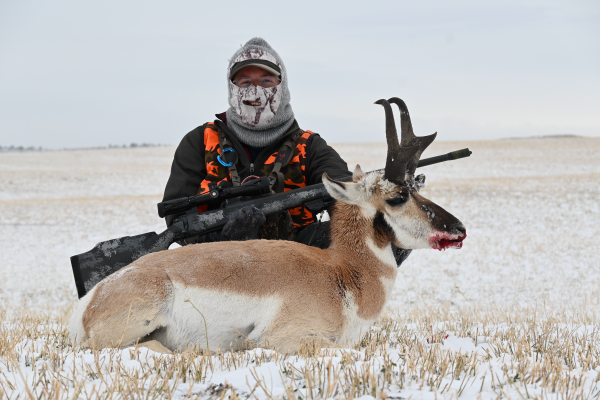 My hands froze as I gutted him. Nic came to help me, and I cut between the ribs, across the belly, and through the spine. We packed out our half, hair on and bones in, our backpacks full as we walked the mile back to the truck. What a cold, miserable, and memorable hunt. The picture is worth 1,000 words!

My advice: Don't get stuck in a hunting mode. Break out of the box and change your tactics for what is going to work in the situation!

Sidenote: Block management areas (BMA's) are private lands the state of Montana utilizes hunter's dollars to rent for public hunting through the Pittman-Robertson Act and other sources. The Act originated in 1937 and is essentially a 10-11% tax on all firearms, ammunition, and some other outdoor/hunting equipment. It raises approximately 86 million dollars annually for the purposes of wildlife conservation, hunter safety classes, public shooting ranges, and hunter access.