This is a series about small game hunting. Readers can look forward to articles on squirrel, rabbit, upland birds, varmints, and furbearers, maybe even turkey hunting. Also, we will talk about some appropriate firearms for this type of hunting. Something else you would like to see? Please contact us here at the Hunting Wire. 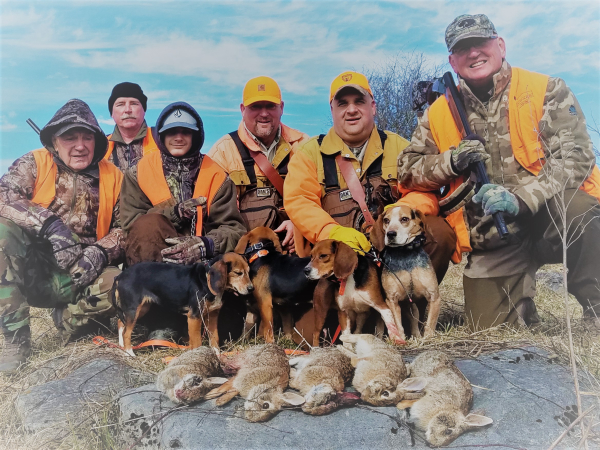 “Look in here! Seek! Get ‘em! Look here!” My hunting buddy’s shouts were measured and rhythmic. He repeated the words over and again, giving emphasis when he stepped in likely looking pieces of cover. When he reached something he thought was especially inviting his tone would change and he would increase the tempo. This meant get here, everybody, right now!

His charges, a pack of no less than nine beagle hounds, seemed to hang on his every word and would rush to him as if they were one giant beagle, all connected. I watched from the side, 20-gauge double over my shoulder, unnoticed by man and dogs, they were in the zone.

Just then a cottontail rabbit squirted out the cover and all heck broke loose. The rabbit disappeared in three jumps, but the beagles exploded in gales of hound music and were on his trail. Unless this rabbit elects to go into a groundhog hole (happens often), swim the Mississippi River, or sprout wings and fly, these beagles will follow him to the ends of the earth.

This moment, when the beagles are clamoring on a hot rabbit track, telling the world they are trailing their quarry, this is what it is all about if you are a dyed in the wool rabbit hunter. Our line of four hunters settles into likely places to watch, standing quietly and soaking up the beagle symphony that was filling up the cold January air.

Back in the day rabbits were the most popular game animal in America and may still be with over 1.5 million bunny chasers in the country. Like squirrels, rabbits are often plentiful and easily accessible as some good rabbit hunting areas can be found on public ground. On private land most any grown-up farmland or brushy area will hold rabbits.

To put a finer point on it the bunny we are talking about hunting here is the cottontail rabbit. This rabbit is a member of the genus Sylvilagus, and can be found over most of North America, Central, and South America. As a game animal most of us think of the cottontail as an inhabitant of the eastern and Midwest sections of the US, but in fact they are sometimes found in large numbers in the western states.

While there are several subspecies, the cottontail rabbit is usually identified by the white cotton ball like tail and white undersides, both of which are usually visible when he makes his getaway from you. Hunters are familiar with a well-known variant of the common cottontail known as the Swamp Rabbit. “Swampers” are found in many wet and swampy areas of the south and are larger than the standard cottontail and have trademark large, webbed feet. Swampers are excellent swimmers and they do not hesitate to hit the water to evade a pack of beagles. The Swamp Rabbit is also known to run a much greater distance when pursued by the little hounds. 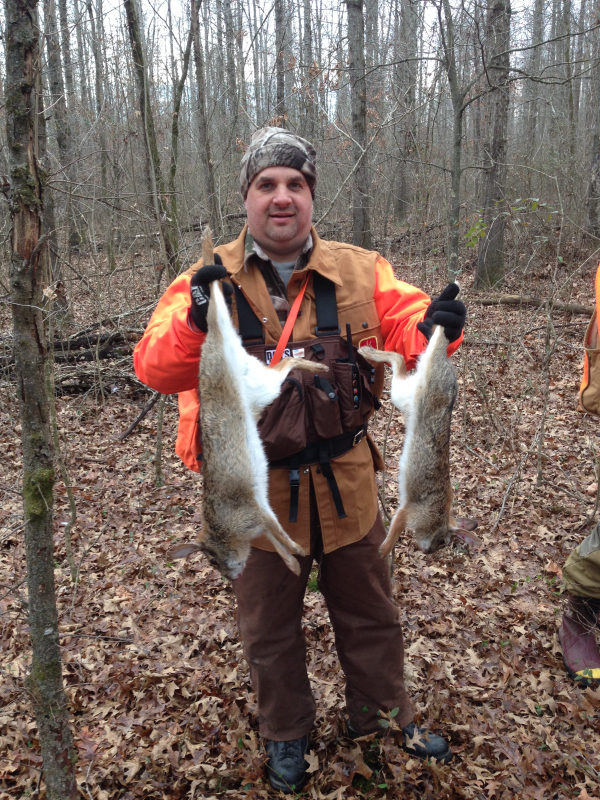 Hunting rabbits is fast-paced and fun.

We should mention another cousin of the cottontail that is of interest to hunters. The Snowshoe Hare is technically not at rabbit, but a true hare. Rabbits are born blind and hairless and the hare is fully furred at birth. Hares are generally larger and have bigger feet and ears. The Snowshoe Hare can be found in several eastern states and into Canada, usually at higher elevations. Snowshoes are famous to hunters for living in extremely thick cover and when pursued by beagles they will run much farther than most cottontails or even Swampers.

Any animal that is a predator likely preys on rabbits. Foxes, coyotes, bobcats, hawks, owls, domestic cats, mink, and weasels are all looking for a rabbit dinner. The only defense the rabbit really has is his speed and staying in thick cover as much as possible. Eventually of course a rabbit is going to travel into a somewhat open area, and they are then very vulnerable, especially to the birds of prey. Rabbits have a very high mortality rate which is why nature provides that they raise usually three litters per year.

As with most game animals, rabbits can be hunted in different ways, but by far the most popular and successful method is hunting with a good pack of beagle hounds. The beagle hound is the center of the universe for this type of hunting. You can hunt rabbits without a dog, and you may have some success but it just ain’t the same without a few of the animated little hounds. Beagle like dogs have existed for thousands of years, according to people who study such things (can you get a degree in Beagleology?) Beagles descended from larger trail type hounds like foxhounds and the St. Hubert hound of the Middle Ages. No less than Queen Elizabeth I had several beagles of a small variety known as “pocket beagles”.

Today’s modern beagle most likely comes from breeding endeavors started in the 1830’s in England and improvements on this by the 1870’s in the good old US of A. We had beagles around when I was a kid, and I thought I knew a little something about them. When I am around beagle hound aficionados today, I am always amazed at the variety of modern rabbit hounds, mostly in the speed realm.

There are now evidently several speeds of beagle hound for you to choose from. Some want a slow, methodical hound that runs the track of the rabbit exactly, not varying one inch from the actual track that the rabbit ran. Others want a faster dog that moves the track and cuts corners here and there, making the rabbit pick up the pace and get out of Dodge. There is apparently all manner of degrees of speed in between these two extremes. If you are interested find a beagle guy and question him about all this. (Warning, this may take several hours!)

Regardless of the type of beagle you hunt with, the drill for a typical rabbit hunt is much the same. You and your buddies bust through the thickest cover you can find to roust out a rabbit. Your beagle pack is doing the same, crawling their way through the briers and brambles trying to jump a rabbit. When a rabbit squirts out of the cover in front of the dogs, the wild music of the beagles begins. The textbook chase here would be for the rabbit to make a large circle, beagles in hot pursuit, and come back somewhere close to the area from which he sprang from cover. Sometimes this happens, sometimes not, often the sneaky little bunny will dive into a hole in the ground (a’ la Buggs Bunny) and the dogs have to look for another rabbit to chase. No problem, you can’t win “em all.

Every chase and rabbit can be different, some will circle back in a few minutes, some could take an hour. The true hound hunters are here for the chase and want the rabbit to run as long as he can. The hunters’ station themselves at different points near the spot where the rabbit was jumped and must wait quietly and not move too much to stand a chance of getting a shot at the approaching rabbit. Once the rabbit is bagged or goes underground the beagles and hunters regroup and advance through the cover looking for the next bunny.

There are other ways to hunt rabbits without the traditional pack of beagles. Before we talk about still hunting rabbits and the traditional method of “kicking brush piles” I have known some bird dog owners to take rabbits with their pointing dogs. Now some hard-core bird hunters will turn their noses up at this method, but the truth is most bird dogs will find and point rabbits. This allows the hunter to be somewhat ready when the rabbit catapults out of cover. The cottontail rabbit is fast and in thick cover your chances for a shot will only be a second or two.

You can take rabbits without any canine help and it can be a lot of fun. Your chances are better with a buddy or two, but you can do it alone. Working the same cover as you would with dogs, the method here is to go slow and steady. Take a few steps and continually scan the cover in front of you. Even in this thick cover believe it or not, what you are looking for is the dark eye of the rabbit. While he is nestled in the bush, the eye of the rabbit will be the most visible to you. This takes some practice and I know some hunters that are very good at this, they will spot ten rabbits to my one, sitting motionless in the brush.

The sitting rabbit affords the chance to use a .22 rifle for the shot if you are so inclined. Two hunters working together, one with the rifle and one with a shotgun, makes for a good combination. Any large pieces of cover, especially brush piles, may hold a rabbit. With two hunters one of you can pose as the beagle and kick the brush pile while the other watches for the escaping bunny.

Like squirrel hunting, one of the great things about rabbit hunting is you don’t need a lot of fancy gear. Your most valuable asset may be some protective clothing, the thickset, nastiest, brier infested cover is where you want to be. Brush pants and chaps are almost a necessity for this type hunting. Some avid rabbit hunters prefer the heavy duck material bibs and overall clothing. This can be very handy, when you return to the truck you can pull off the overalls which will likely be covered in burrs and briers. Blaze orange should be worn by everyone in the party.

For a shotgun, a good choice may be the CZ-USA 10-12 semi-automatic. The new CZ-USA 1012 is a semi auto that will shoot like a house on fire with whatever you stick in it, light 2 ¾” loads to heavy 3” Magnums. This is not a gas-powered shotgun that can be a little finicky when it gets dirty. The 1012 uses the energy of the recoil to eject the spent shell and load the next round. CZ-USA put the 1012 through the wringer firing over 5,000 rounds without cleaning or any lubricant. This shotgun will stand up to anything the rabbit and small game hunter will throw at it, briers, brush, and muddy beagle tracks. A shotgun using inertia to work the action is not new, but one with an MSRP of $659.00 is. www.cz-usa.com

As noted earlier, a team of hunters still hunting for rabbits may want to include a .22 rifle. The Savage A-22 Rifle will fill the bill for this work. Savage Arms, long known for no nonsense firearms, has come to the forefront in recent years with high quality rifles that won’t break the bank. Savage wowed the rimfire world a few years ago with the introduction of the A17, the first high-performance semi-automatic rimfire specifically designed for the 17 HMR cartridge, as well as the A22, in 22 Long Rifle. The receiver on the A22 is machined from a single billet of case-hardened steel; this is a major upgrade from die-cast receivers in other rimfire rifles. Like its predecessors the A17 and A22 Magnum the A22 model features a thread in barrel with zero tolerance head space similar to how Savage constructs its centerfire rifles. The 22 inch carbon steel barrel is button rifled for improved accuracy. MSRP $281.00 www.savagearms.com