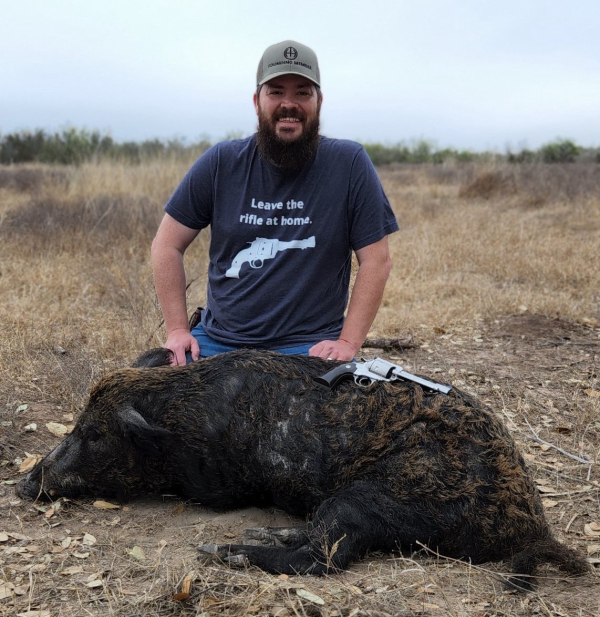 The author dropped this 200+ lb boar with his Ruger .357 Magnum - not exactly a hand cannon. It got the job done.

No other method of hunting has as many myths or misperceptions as handgun hunting. Whether they involve range, power, or recoil, these myths seem to endure despite decades of proof to the contrary. As discussed in the last article in the Handgun Hunting 101 series, I believe handgun hunting is the most rewarding way to hunt. Dispelling these myths is a meaningful way that we can break down the barriers between hunters and this incredible sport.

But what are these myths, and why are they still hanging on? I'm going to break them down into the five most pervasive myths that I, and other handgun hunters I know, have encountered.

Over the years, I've mentioned my passion for handgun hunting to many people. One of the reactions I get is something like, "What do you hunt? Like, varmints and stuff?" First off, yes, I love hunting varmints with my handguns! Second, I do not know of any huntable species in the world that hasn't been hunted with a handgun. From squirrels to elephants, handguns of the appropriate power level are available for just about anything you want to hunt.

Killing most animals humanely isn't as hard as many people have made it out to be. Yes, you want a margin of error regarding power, but what matters more is where you place your shot. On a deer-sized game, one good shot with a .357 Magnum can be more effective than six bad shots with a .44 Magnum. This is where practice comes in. You owe it to yourself and the animals you hunt to be as proficient as possible with your handgun.

As with all types of hunting, we owe it to the game we pursue to match what we are hunting to what we used to hunt. Being undergunned can mean the range at which you take your shots and the caliber you choose to shoot. This brings me to myth number two.

2: Handguns have a very short range 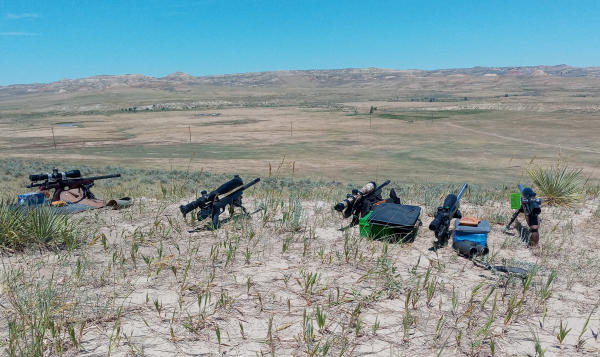 One of the firing lines at Wyshot. The targets are in the valley below us and up to 1400 yards away.

Elmer Keith, the famous gun writer of the mid-20th Century and the godfather of modern custom revolvers, once shot at a wounded deer running away from him with a .44 Magnum. The shot was at 600 yards, and Elmer later found that his shot had gone straight through the jaw of the deer and out its nose.

I've been to a competition called WyShot, where we bang away at steel targets using XP-100 style bolt action pistols chambered in traditional rifle calibers. The farthest shot I made was at over 1400 yards using a 6.5 Creedmoor pistol and a 15x scope.

Please don't misunderstand; I am not suggesting that I think it is a good idea to hunt at these ranges. First, hunting at that range takes too much of the fun out of it, in my opinion. Also, I think that too much can happen between the time you pull the trigger and the bullet reaches its target at those ranges. My point is only that handguns are capable at those ranges. Every bit as capable as a rifle - if you've done your part at the range. If that's true, shooting at an animal at normal hunting ranges will mean plenty of killing power.

Besides, what's so bad about limiting your range? A shorter range means you need to be a better woodsman or woodswoman to get closer to your game. This is one of the great joys of handgun hunting!

3: Handguns have too much recoil

A specialty pistol in 26 Nosler, a big cartridge. The top is just before the shot, the bottom is a full recoil. Less recoil than many may think.

Recoil is a highly subjective thing. I have moderate recoil tolerance but don't enjoy being brutalized. On the other hand, I know several handgunners who live for recoil; the bigger, the better for them! Handguns are indeed difficult for novices to shoot, but there are plenty of options that are both pleasant to shoot and capable of humanely taking game.

Recoil is a factor when considering a hunting handgun, but you'd probably be surprised at how manageable it is with guns you might be worried will kick too much. The most common response I get when I show someone a pistol chambered for a traditional rifle cartridge is, "Man, that thing must kick!" Well, a 5-6 pound single shot chambered in .308 will not kick near as much as a 3 pound, short barrel, big bore revolver. If you're curious about what guns are best for your recoil tolerance level, our community is great about sharing our experiences.

Lastly, recoil tolerance is not a fixed thing. You can learn to handle harder-kicking guns by spending time at the range. Recoil control depends on technique so that it can be mitigated by practice. Just be sure to make your practice intentional and focused.

Here's something that's not too well known: accuracy has almost nothing to do with barrel length. Velocity has a lot to do with barrel length. While a shorter barrel will lose more velocity than a longer barrel, it can be just as accurate - and the velocity it does have is plenty to hunt. Some revolvers built today can shoot less than 1-inch groups at 100 yards, and specialty pistols in rifle calibers shoot well at ten times that distance.

This is also a good time to stop and discuss your accuracy requirements. With the advancement of technology and gun-building techniques, the consumer's requirement for accuracy has dramatically increased. As a former custom gun builder, I can tell you that my clients expected the guns I built to produce tiny groups. They always did, but is that necessary for a hunting gun?

Let's say you're pursuing whitetail deer with a revolver - the most common type of handgun hunting in the USA. You've gone to the range and determined that you must keep your shots under 50 yards to feel confident. (We'll talk about this later in this series.) Let's say that a deer's vital zone is four inches in diameter. It's probably a little bigger, but we'll give a margin of error. That means you must consistently keep your shots within a 4-inch circle at 50 yards. You'll be shooting 8" at 100 yards or 8 MOA if you can do that! Not what our modern sensibilities call accurate.

Let me say that I do think accuracy is essential. Drilling down at the range with different loads and techniques to wring the best accuracy out of your gun is part of the fun and is vital to developing your skill. Just don't think you have to have a weapon capable of shooting a fly off a fence post at 100 yards before you can go to the woods.

5: It's illegal to hunt with a handgun.

Not true. Using revolvers that shoot straight-walled cartridges can increase the areas you can legally hunt in. There are places in the U.S. where you can shoot a deer with a .357 Magnum, but not with a .30-06 due to human population density. There is even such a thing as handgun-only seasons in certain areas. You want to check the laws and regulations where you will be hunting, but using a handgun doesn't limit the places you can hunt in the U.S.

OK, now we've gone over the most common myths; why do they persist? Well, handgun hunting has always been a small segment of the overall hunting community. This means not many people are getting the word about this beautiful sport. Additionally, the difficulty level is so much higher than hunting with a rifle that people are more likely to make excuses for why it isn't feasible. If it takes work to be successful at something, it's easy for some people to say it's a "stunt" rather than putting in the work it takes to get good. Not you, though. YOU want to get in the field with a handgun!

In the next article in our Handgun Hunting 101 series, we'll be going over selecting the right handgun for the type of hunting you want to do. Until then, good shooting!